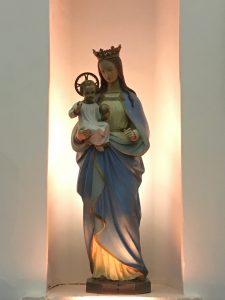 Little is known about the beginnings of the Catholic faith in the town of Hawick; however it can be safe to say the Holy Sacrifice of the Mass was offered there in the seventh century. On the 29th May 1214, a structure was solemnly dedicated by the Bishop of Caithness as the church of St. Mary’s. St. Mary’s served the church in Hawick for three hundred and fifty years, until the Reformation swept through Hawick, and the sanctuary lamp was extinguished

There is no record of any church in Hawick for three hundred years, until 1845, when an entry appeared in the Catholic Directory. The entry described how, for many years, Catholics had been growing in number in the town, virtually unnoticed, until in 1837 they were first found out by the Rev. William Wallace of Traquair. 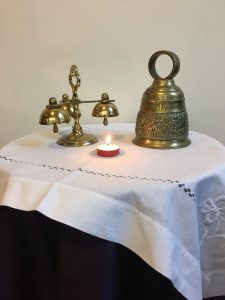 Participation in the Hoy Mysteries happened rarely in Hawick, due to the distance to any Catholic place of worship. It was the Rev. Mr Wallace, in 1839, who made a request for a church for those Catholics, in Hawick, who worked in the “Lower areas,” of society. This request was successful and a plot of land was bought for £550. Preparations were soon underway in the construction of the church which was solemnly blessed and opened on May 22nd, 1844 by the Right Rev. Dr Gillis, Coadjutor to the Vicar Apostolic of the Eastern District of Scotland.

While providing pastoral care for the town of Hawick, the parish priests for many years administered the sacraments for towns including Newtown St Boswells, Jedburgh, Kelso and Galashiels. To the present day, the church continues to serve the community of Catholics, administering the sacraments, providing for the poor and upholding the Catholic faith in the town.